First of all, it's good to speak to you! Apologies for the lack of Discovery Scanner last week, we were incredibly busy. But that was last week, and now we're back! So without further ado, here's everything you need to be aware of in the world of Elite Dangerous:

As you may have known, there has recently been an issue where Carrier upkeep was failing to be deducted under the planned cadence, causing it to stack up and show inflated totals in Carrier management. The dev team have put in a fix for this, but here are some things worth knowing about the fix, as shared by Sally last week:

Here's an up-to-date list of the bigger known issues we're looking into:

We'll have a new episode of Frameshift Live for you this week at 4PM BST on Thursday 30th! You can expect the usual game updates, as well as some community highlights, and if all goes to plan, another developer interview (they are just as busy as us at the moment!). Remember to tune in live in order to earn a Summer paintjob for one of your ships!

Lavecon is fast approaching, and there's still a chance to get your tickets for the Elite Dangerous-themed meetup! Some of the community team will be there to say hello, and maybe even put on a fun show with some developers! It'll be great to see you all in-person again soon. 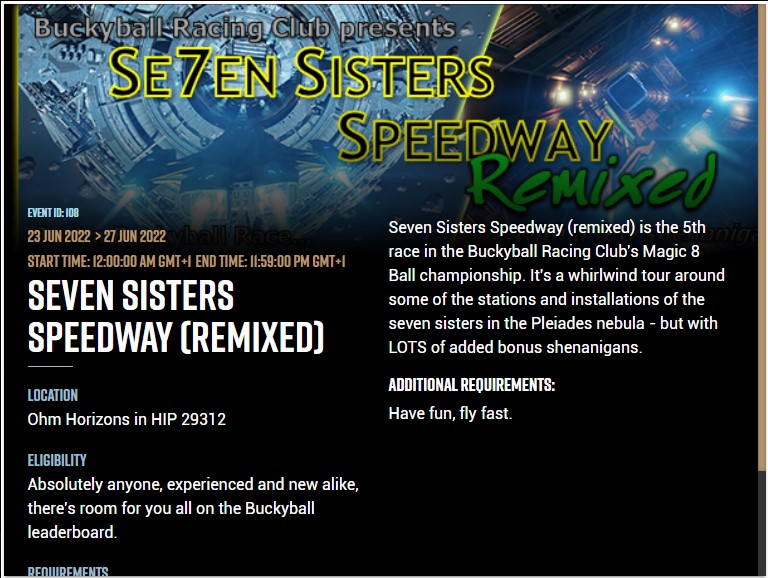 As of writing, today is your last chance to post a time on the latest remixed Buckyball race! This one will see you racing around the Seven Sisters in the Pleiades nebula, so don't miss out!

The High Wake has done it again with another fantastic animation! This one may just hit you in the feels, so be prepared.

Commander Streya is creating their very own CMDR jacket and is including awesome custom patches like this one! We can't wait to see the finished product.

That's all for this week!

Sign up for our weekly newsletter for exclusive information and insights into the world of Elite Dangerous!